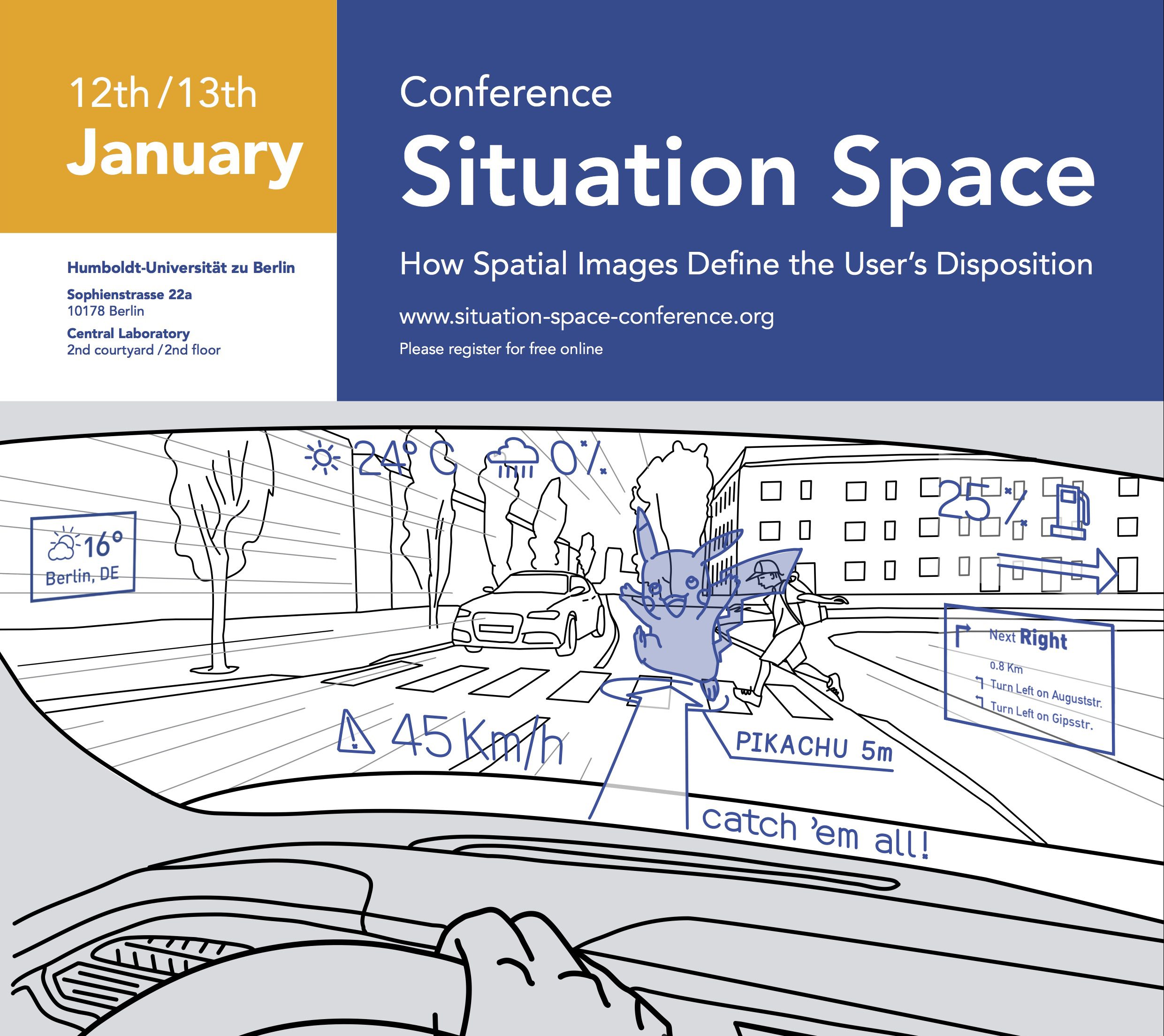 Together with my colleagues Luisa Feiersinger and Kathrin Friedrich I will host the conference Situation Space – How Spatial Images Define the User’s Disposition.

Abstract: Contemporary imaging, sensor and display technologies have turned viewing predominantly into using. Interacting with visual devices and interfaces such as virtual reality headsets, augmented reality apps or navigation systems situate users in space both within and beyond the boundaries of the screen, for instance when playing Pokémon Go on a smartphone, or when superimposing medical images on a patient’s body. Narrative media such as stereoscopic movies, volumetric cameras or curved displays also require a visual practice that spatially aligns image and viewer. In the case of a stereoscopic projection, for example, the spatial impression of the image is most intelligible and convincing if the physical position of the viewer corresponds with the camera-viewpoint.

Critically thinking about producing and perceiving images thus requires the analysis of image dispositions. Understanding the spatiality of images requires a consideration of situation space, that – just as the situation room – implies and defines the need for action. With regard to spatial images we thus ask, how do screens situate the viewer in physical space and within the visualised space? Are these spaces connected by means of interface and interaction design, content creation or narrative strategies? Does the ability of the viewer to physically and visually navigate through the image increase or decrease, if the images can be characterized as spatial? And following that, how and where is agency ascribed to the viewing of images? Do forms of spatially related visual practice prompt the viewer to connect action and perception? And does this require a re-conceptualisation of the dichotomy of viewer and user? In short: how does the image (understood as the alliance of screen and visualisation) conceptualise and define the user’s spatial disposition?

The analysis of the visual construction and representation of space, as well as the associated iterative interplay of structures and processes in front and behind the screen has been a concern of aesthetics, art history, image- and film-theory, media studies, visual studies and science and technology studies. But traditional views on the spatiality of the image are challenged by contemporary imaging technology, which proposes new forms of visual practice. New approaches concentrating on specific aspects, such as the mobility (Verhoeff 2012), and archaeology (Huhtamo 2012), social, narrative, and architectural structures (Elsaesser 1998), or the three-dimensionality (Schröter 2014) of screens and visualisations, reflect the turn towards the particular role of the image in situating action and perception.

The workshop aims to apply theoretical and practical approaches in a discussion of the operative and narrative implications of visual practices as spatial dispositions. In order to analyse how images define and situate viewers’ action and perception, the workshop focuses on visual practices such as mobile displays, mixed reality games, screen architectures and stereoscopic media.