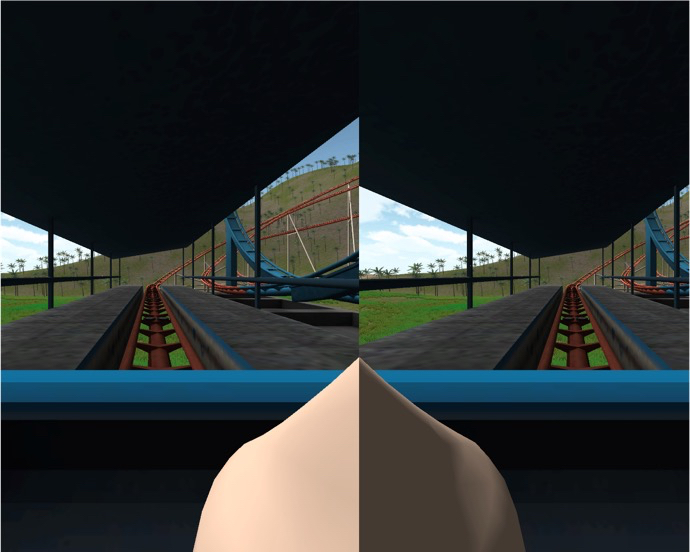 Besides all the hightech opportunities of Augmented Vision people tend to forget about the fact the visual erception is a bodily experience, it’s not something we can completely virtualize: David Matthew Whittinghill, Bradley Ziegler, James Moore, and Tristan Case have found that a virtual nose may reduce simulatir sickness in virtual reality video games. Read on at the university website / Abstract: „Simulator sickness is a phenomenon experienced in virtual reality applications that causes users to experience an intense sensation of vertigo and, in extreme cases, nausea. Our team has discovered a simple technique for reducing the intensity of simulator sickness. Anecdotally we have observed that placing a fixed visual reference object within the user’s field of view seems to somewhat reduce simulator sickness. To more formally test this observation, we placed a three-dimensional model of a virtual human nose in the center of the fields of view of the display of an Oculus Rift: the left display seeing only the left half of the nose model in the lower right corner, the right display seeing only the right half of the nose in the lower left corner. Two groups were tested, the Nose experimental group and the No-nose control group. Forty-one subjects were asked to operate a number of different virtual reality applications of varying motion intensity and user control. Users in the experimental group were able, on average, to operate the VR applications longer and with fewer instances of stop requests than were users in the control group. Galvanic skin response was also measured, however a statistical comparison of the groups is complicated by the necessarily shorter play duration of the subjects in the control group who opted out of the experiment due to vertigo. We observed an unexpected effect in that subjects reported being unable to consciously perceive the nose model. These findings reveal a practical, inexpensive means of reducing simulator sickness in virtual reality applications.“