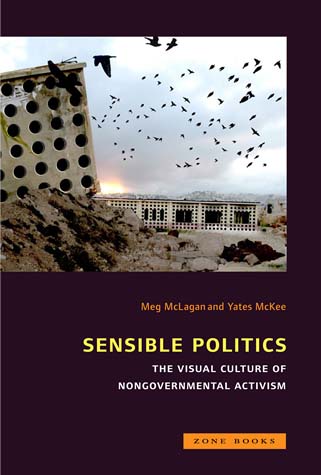 With Sensible Politics. The Visual Culture of Nongovernmental Activism yet another interesting work about the interdependence and influence between art and politics, between visual culture and activism has been publsihed by Meg McLagan, Yates McKee at Zonebooks. While similar projects such as Beautiful Evidence explore the visual culture of activism from the activist side, the New York City based authors have brought together a group of contributors from art historians, anthropologists, and political theorists to artists, filmmakers, and architects that analyse the „constitutive role played by aesthetic and performative techniques in the staging of claims by nongovernmental activists“.
While it mainly opens up a theoretical perspective on the topic the books may also be useful as a practical guide for thinking and acting. From the announcement at MIT press: „Political acts are encoded in medial forms—feet marching on a street, punch holes on a card, images on live stream, tweets—that have force, shaping people as subjects and constituting the contours of what is sensible, legible, visible. Thus, these events define the terms of political possibility and create terrain for political actions. (…) Attending to political aesthetics means focusing not on a disembodied image that travels under the concept of art or visual culture, nor on a preformed domain of the political that seeks subsequent expression in media form. Instead, it requires bringing the two realms together into the same analytic frame.“